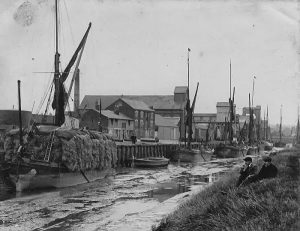 I previously wrote about the Thames Sailing Barge, British Empire and the rapid decline of a once handsome and rugged workhorse.

The article was picked up by The Barge Blog, who kindly included a link to my story and it seemed to generate some interest.

I recently came across some information about Thames Barges on my local history website, Goldhanger Past. There was a link to Mersea Island Museum where there is more information and a couple of photographs of the British Empire. The photos are copyrighted so I’ve only included links to them here.

One of the photos shows British Empire loading straw at Colchester Hythe. Another shows British Empire being towed down Colchester River in a convoy of Stackies (the term used to describe a barge laden with a stack of straw). I know I included this piece of information in my previous post but I took the liberty of repeating it here. I hope I haven’t broken any copyrights by including it.

BRITISH EMPIRE was built 1899 by Stone Bros., Brightlingsea Bros at Brightlingsea for Henry Howe of Colchester and in her earlier years was employed in taking hay to London. Official No. 109616. She was Colchester based throughout her working life and an engine was installed in 1951. She continued in trade until about 1955 when she sank loaded off Brightlingsea, her skipper at the time was Ray Green. She was raised and sold to Brown the Chelmsford timber merchant for use as a lighter in Heybridge Basin when the register was closed 3 Feb 1955. She was sold and rerigged 1978, but has finished up as a hulk at Battlesbridge.

Some of the comments on The Barge Blog proved interesting too.

“I looked on board the British Empire in 1991/92 when she was still afloat alongside the mill and though leaky, she was still complete and quite smart to look at. It’s really sad to see how she has become in such a relatively short time”

The following comment I found interesting. Was there more than one attempt to have her restored, or was this the same one I was involved in?

“I well remember British Empire as a timber lighter for Brown’s at Heybridge Basin as I used to climb all over all of the barges there when “Dillbery” Clarke was not around. When the lock was enlarged in 1964 Brown’s fleet were sold off but she remained in the Basin for another two years or so eventually going to Conyer where she was partially rigged out and seen out under sail a few times. In late 1979 a new steel mast and spreet were made up for her and fitted in 1980. She lay for a while at pin mill fully rigged and eventually finished up in Brightlingsea where she was to become a sailing school but finished up with a writ on her.

She was sold very cheaply and was taken to Battlesbridge on the way there getting ashore and breaking a leeboard. She never got under way again and lay there looking sadder and sadder and finally became tidal. Some years later a former crew member of mine tried to set up a trust to restore her back to sailing condition and many tons of mud was removed from inside her, it was found at this point due to the berth that she was hogged around 18″ and they were unable to refloat her due to damage to her bottom. The trust fizzled out and poor old British Empire was left to sink further into the mud.”

“One of the shopkeepers told me a few years ago a lorry turned up without permission and grabbed what scrap they could causing extensive damage. Luckily they’d (presumably the shopkeeper) hidden a few bits away which now form a kind of sculpture by the cafe.”

So, the sun continues to set on the British Empire and night draws rapidly in. I wonder how long it will be before she becomes so much a part of the river that you won’t be able to tell she was ever there?

Hello. Every now and then I look up SB British Empire on line. My wife and I bought her on March 25th 1972. We used her as our home until 1984. During that time I re-built her- much of it down to the waterline and some just a little below. Only Silvertown’s May was more re-built at that time. She was fully rigged and sailed up the East Coast, during long summer holidays. She stayed for free in St Catherine’s Dock too, for a while. Things have changed! Much inaccurate information has been published about the time we had her. I have many photos of the work done and of sailing trips around. She might not have been noticed, because for a long while, there was no name on the transom. We sold her for the price of a starter cottage- £17,500- not so cheap. She was bought by a well meaning chap called Nick Bartle. He borrowed every penny from a bank to buy her. Within two years the rolling interest had crippled him and his family. The county sheriff seized the barge and his house too. She was then sold for £13,000 to the guy who owned the pub, ‘The Barge’, at Battlesbridge. People know all about this period. I sailed her up to Freddie Webb’s yard (Freddie sold her for me) at Pin Mill when I sold her- my very last sail in her. I loved her, but she became a monster in the end- taking all my effort and money to keep her sailing. Do get in contact should you wish.
Regards,
Bill Langdon
01752 842533