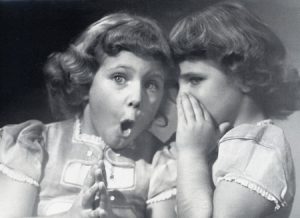 I was listening to the ‘Infinite Monkey Cage‘ on Radio 4 on my home from work this evening. They were discussing code-breaking and the extraordinary achievements of the team working at Bletchley Park during WWII.

There were about 10,000 people working there and all were sworn to secrecy, with something like only 6 people in the world who knew the extent of the work at Bletchley Park in the war effort. This secrecy continued for decades after the war.

As is the way with the Official Secrets Act, there are various time periods when secrets are no longer secrets. As deadlines passed and knowledge could be shared, some extraordinary stories began to emerge. A husband might turn to his wife 30 years after the war and tell her, ‘I have something to tell you. I worked at Bletchley Park during the war.’ To which the wife might reply, ‘So did I. Which hut were you working in?’

This shows the lengths to which ordinary people like you and I would go to to keep the secrets they were sworn to. It also set me to thinking about the secrets people keep from each other and how we choose whether or not to reveal them. My story entitled ‘The Secret‘ was based on a similar idea – two people living with a secret they both knew about. There are always things we do not discuss with others, however close they may be, and it is these things that weave subtly into a story-line to create interest and suspense.