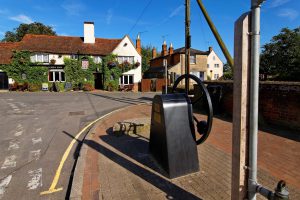 A tour of Goldhanger today as part of National Heritage Open Day.

Our guide was David Newman, who also runs the comprehensive Goldhanger Past website.

Although I’ve lived in Goldhanger about 18 years it was still a fascinating tour and I learnt things I didn’t know. Over the years I’ve read bits of the Goldhanger Past website but it has been added to so much there is always something new on it.

Living in the Coastguard Cottages gives me a strong link to a thread of history in this village. I like that feeling of connection to people who have been here before. It’s a tenuous connection as the lives of Goldhanger residents 50 years ago, 100 years ago, would have been very different from mine. The village was far more isolated than it is now and would have been almost self-sufficient because of the isolation.

There was a time when the sea wall would not have held back the tide completely and the land to the bottom of Fish Street and beyond would have flooded at high tides. Because of the lie of the land, this meant that a direct route to Maldon – the nearest market town – was not possible and a detour would have to be made via Little Totham. This added some miles to a journey and increased the isolation. Considering the number of creeks reaching inland along the estuary, a large number of villages in these parts would have been more isolated than they are now.

Isolation also meant that nefarious activities could take place and often go unnoticed. While it may have been quite lawless in these parts there are records stretching back centuries detailing court appearances and convictions. Goldhanger has long been known for illegal activity, such as: endeavouring to steal and convey away somebody’s daughter; felony; dice playing; not attending church on Sundays, and smuggling – a thriving activity in its time. Various ale-houses were notorious for rowdy behaviour and the owner of one even set up and built the Wesleyan Chapel in Head Street!

There can still be a sense of isolation here, even in the 21st century. There are no shops in the village any more and no Post Office. Shopping takes place in Maldon and if you have no car you have to rely on the few buses that come through the village. In almost 20 years of living here it has been rare that I cannot leave the village because of flooding or snow, but when it does happen I’ve been glad of a well-stocked freezer.

Some years ago, we had regular power cuts because of a fragile sub-station that would cut out at the merest hint of rain. This had the effect of bringing people together by candlelight to pass the time. The Chequers would continue to sell beer from hand pumps and was lit by candles and oil lamps. Since extensive work was carried out by the energy companies we get very few power cuts now. They were inconvenient if you were in the middle of cooking dinner (there is no gas in the village) but at other times forced us to abandon the modern world and go back to the more simple pastimes that our ancestors would have enjoyed.

This is a fascinating, historic, and peaceful place to live and I love it.