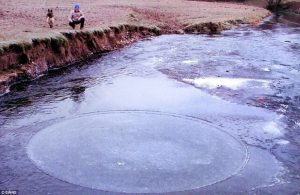 A disc of ice, measuring 10ft across, was spotted in Devon during last week’s freeze, swirling on the River Otter near Honiton.

Ice circles are known to appear in the Arctic, Scandinavia and Canada, but this is thought to be the first seen in Britain. They occur at bends in the river where the accelerating water creates a force called ‘rotational shear’, which breaks off a chunk of ice and twists it around. As the disc rotates, it grinds against surrounding ice – smoothing into a perfect circle.

Both men were amazed by the slowly-rotating 10ft-wide and perfectly circular phenomenon which was stationary in the current. It was about 6ft from the bank near where a stream joined the river.

‘It was about 10ft in diameter and, on timing it, we discovered it was completing a revolution in four minutes and ten seconds.”