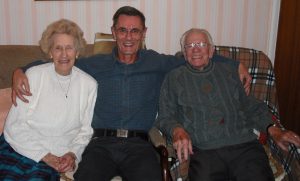 Since meeting Auntie Joan and Uncle Fred again I’ve been back for Boxing Day and spoken on the phone a few times. Joan will ring and say, “It’s your Auntie Joan,” with a little laugh that I know means how happy she is to be able to say it. I feel just as happy hearing her say it and it gives me a huge warm feeling and makes me smile all over.

I spoke to them (well, I spoke to Joan as Fred doesn’t hear on the phone too well and leaves phone calls to her) this afternoon and we nattered about the beauty and wonder of the world. She was describing an ice circle that formed on a river in England somewhere recently and told me how it is often found in Scandinavian countries but not usually over here. I could hear the wonder in her voice and she said she thinks this attitude must run in the family. Steve is fascinated by the beauty of the world, as am I. I get the feeling that my dad was too.

Fred is 82 on Monday and from what Joan said she is finding ageing a bit frightening. But then she changes the subject and moves on. It’s not the first time she’s mentioned it. I think both of them are older than my grandparents were when they died so I guess the course of time is making itself felt. I don’t know about Fred’s parents yet. I remember how anxious I got in the run up to my 44th birthday. Dad was 44 when he died. And now I’m approaching the age at which my mother died as well. It makes you aware of your mortality.

I must ask Fred about his family when I go over next. I don’t know anything about his side of the family and it will give me the chance to concentrate on him and his history rather than chattering on about my dad. It will also give me more to add to my family tree.