My father died in 1974. That’s nearly 35 years ago! I’m not sure what happened to all the photographs but I haven’t seen his face since then. All I’ve had is a memory and I’ve often wondered how accurate that memory is. Do I really look like my father? Or at best, do I bear a passing resemblance? I was never sure.

I also lost touch with the rest of my family at the same time.

For the past couple of years I’ve been researching my family history on Ancestry.co.uk. I use a friend’s login and last year we received a message from someone who said that his friend (the friend is my cousin) recognised names on my family tree and was I related to Christopher Smith? Well, that’s me. So I sent a reply back and never heard anything from them. Just before Christmas I phoned my friend and asked if she could send a message to Ancestry and ask for the original message so I could try replying again.

As she was typing the message she asked me if I’d tried looking up my cousin or my aunt (my dad’s sister) and uncle on BT.com or some such directory. I’m sure I tried it before but decided to try again. An address appeared that looked vaguely familiar and I decided I had nothing to lose by writing and asking if this person was my uncle. On the 12th December 2008 I posted a letter at 12 noon. On the 13th December I had a message on my answerphone from my aunt. She started by saying, “Hello Christopher. It’s your Auntie Joan.” I gave a triumphant whoop and burst into tears.

I had to phone my friend and cry all over her before I could muster myself to phone my aunt back and the following day I went to visit them.

It was almost as though 35 years had never passed. Both my aunt and uncle are now in their 80’s and have all their faculties about them but they are still my aunt and uncle. They’d often wondered what had happened to me. My cousin came over as well. He was about 13 the last time I saw him and he’s now 48! 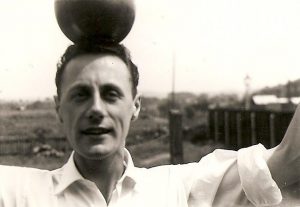 I came home with a bag full of photographs and I haven’t stopped looking at them since. When I left my aunt and uncle I told them I felt as though I’d had a hole in my life that I’d covered in sticky plaster and sellotape and didn’t really know it was there but now I felt as though I had something to fill the hole with. I felt more complete. I feel as though I have an identity, some solid foundations.

The day of the visit was the weekend before my birthday and 2 weeks before Christmas. It was the best birthday and Christmas present I could have wished for. I went back on Boxing Day and have spoken to them on the phone as well. 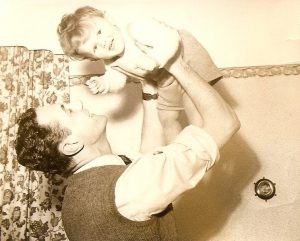 I’ve kept 2 of the photographs of my father in my wallet and must have shown them to everyone I know. The VERY BEST part is that everyone I’ve shown them to has said how much I look like my father. They’ll never know what that does for me. I can feel myself swell to bursting with pride.