I’ve been signed off work for 2 weeks and referred for counselling. Dr. Roper was lovely as usual: warm; gentle; smiling; calm – I always want to cuddle him. I felt quite a sense of relief, not only time off but the offer of something that could help me afterwards as well. It might be a 6 week wait before I can be seen but it’s the light at the end of the tunnel. I should hear from them during my 2 weeks off. 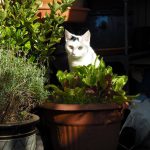 The girls had their first outing today. It seemed as good a day as any. I’m going to have a few days relaxing so I figured it was about time. 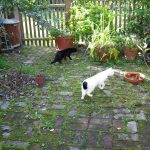 I’d not long got back from C&P’s, it was a nice afternoon and I was going out to hang out washing, so I opened the back door and encouraged them out. It took a little while to venture further than the back door step but eventually they were up the end of the garden with lots of sniffing stops on the way. 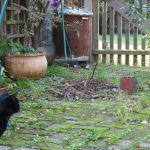 When another cat appeared at the gate at the end of the garden they really weren’t sure what to do. Squiggle suddenly appeared twice the size when all her hair stood on end.  They both took turns staring the other cat out, withdrawing now and again so the other one could take over. 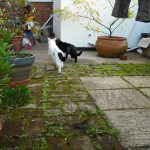 When a second cat appeared they were more than curious. I think they were both Patsy’s and had just come to see who the newcomers were. There was no hair on end, growling or hissing on their part. When a sound startled them both they shot indoors and growled from the safety of the back doorway.

A few times I came indoors and forgot about them. When I went outside they’d appear quickly or I’d find one of them behind a plant pot. 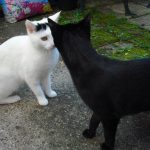 They can have another outing tomorrow.