A blank page to a writer or an artist holds the same potential and the same fears. It has the potential to hold everything or nothing and the fear is of the first stroke you make on the page. That first mark is as important as the last one. This paragraph is my first mark.

I have no idea what I’m going to write about. I just feel like writing. All sorts of ideas keep flashing into my head so I thought I’d see where this went. I’ll begin with the thing that is foremost in my mind. I’m listening to something quite jolly on Radio 3. The cats are asleep on the sofa. It’s warm and cosy in here. And I’ve got a beer in the cupboard that I keep forgetting about.

Just after my 50th birthday I had one of those revelations that come to you through life now and again. You know, those bursts of insight that don’t quite solve life’s difficulties but can help with them. Once you’ve had one you know that it highlights the difference between knowing something and knowing something and understanding it fully. The supernova of revelation feels quite life-changing at the time but like any other burst of energy it wanes and loses its radiance. Doubt and uncertainty can creep in and you might have to remind yourself of the effect this insight had on you. Your own levels of confidence in yourself and your sense of self-belief eventually affect those revelations you have about your self.

My revelation was about me. I recall a poem about growing old disgracefully. I can’t recall the title of the poem but it involved things like dragging your walking stick along the railings, spitting in the street, jumping in puddles, etc. The message was really about being yourself! Just because you’re old doesn’t mean you don’t want to do those things. I love jumping in puddles now – and I’m 53. The content of the poem fits in with the realisation, for me, that I could do and say as I liked.

As long as I wasn’t being deliberately hurtful, malicious, or criminal I could say what I liked and if somebody didn’t like it then it really was their problem. I’ve always considered myself outspoken but I might not have been as outspoken as I thought I was. I often feared what others would think of me if I said or did what I was really feeling like doing or saying. If it damaged their perception of me would it, by default, damage my own self-esteem or self-worth? The answer often seemed to be yes. Like I give a shit anymore.

There are ways of saying things that can be as kind and thoughtful and diplomatic as you like. It’s often how what is said is taken by the recipient that can cause the problems. I’m no longer afraid of the possible outcome like I used to be. Things are never as bad as you fear them to be. I realised one day that I’d overcome the fear of a result that might not happen anyway. That result certainly needn’t damage my self-esteem or self-worth. It is only me who can do that.

If that sounds a bit arrogant it’s because it is. That was another thing that came with being 50 – more arrogance. It’s not at a dangerous level and I can’t be classed as an arrogant person, it’s just that I don’t care. It’s part of the development of my Grumpy Old Man phase, I think.

The impact, or causal effect, to stimulus external to our self is a subjective phenomena. It is our personal history, our genes, our primal instincts, that contribute towards our understanding of the outside world. In effect we all have a unique picture of the world and how it works. My picture is similar to yours but it will never be the same and I will never understand or experience it in quite the same way as you.

So I’m getting on with living in my world and experiencing it in my own way because it’s comfortable and exciting to be me. I can’t be anyone else anyway.

Not bad for having nothing to write about, huh?

And I still forgot about the beer! I’ll have it now.

BBC Essex on the radio, playing some nice music.

Why do so many local radio presenters sound so alike? Particularly the men. I used to be convinced the same guy dashed from one radio station to another to present shows under different names. Their voices sound similar and they have similar patterns of speech and intonation. Perhaps they all went to the same DJ school.

And that Robert Preston! BBC business editor or something – often on Breakfast TV and Radio 4. He’s on a lot lately because of the credit crunch and the recent business with the banks running out of money. He trips along in his speech in quite an awkward manner. His inflexions, tones, pauses and emphasis come at the most unexpected moments. I find it annoying and fascinating all at once.

Listening to him is like trying to negotiate an unfamiliar obstacle course. I’m constantly stumbling to keep up with his flow. I’ve suspected there’s evidence of some sort of past speech impediment overcome, or a learned, practiced, way of speaking that seems to him to fit the purpose.

There’s often a young woman in tow on these radio shows. Think Terry Wogan (he’s pc though – he has a man as well). They seem to be in the background to provide some back up to the presenter, and read the weather and travel news – a kind of afterthought or second-rate presenter. Perhaps they’re in training. There’s one who mumbles something now and again on whatever I’m listening to at the moment.

I find the way most people speak fascinating. I love listening out for their quirks in speech and expression of speech. I love listening to their traces of accents, their inadvertent windows when their real  selves show through. People also leak emotion in their manner of speech and in Freudian slips. Are puns Freudian slips? I’ve often wondered where the connection comes from in the train of thought that leads to the pun. There’s always relevance to the initial subject of conversation.

28th October 2008. 05:59. Barely getting light. Couldn’t sleep and it started getting light with a clear sky so I decided to go for a walk with the camera. 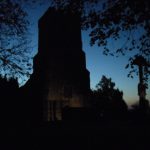 The church with a pale lit sky behind. It got colder as I walked down Fish Street and I could just make out frost on car windows in the half light. The grass on the playing field was pale and crisp underfoot. By now my ears and nose were going numb. I was glad I’d wrapped a scarf round my neck as I went out. 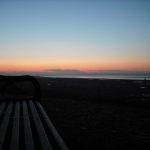 The view down the Estuary from the bench at the end of Goldhanger Creek. I thought it would be interesting to lean the camera on the arm of the bench and catch some of the bench in the photograph. 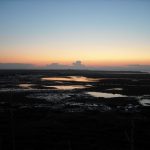 Across the sand spit towards the oyster shed. I loved the sky and the pools of water in the mud here. The cloud in the centre of the picture is partly reflected in the main body of water. The band of orange provides a great contrast. 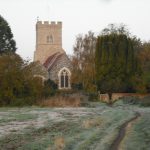 Approaching the church from the field behind at the end of the walk. You can see the frost on the ground. I’d just passed the first person I’d see that morning, out walking her dog.

The stile post at the back of the church, covered in frost with a brightening sky behind. I focused this one on the sky so it darkened the foreground. You can just see the line of frost on the top of the stile post. 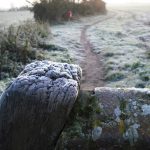 The same post but looking down at it so it caught the light more. Although the two pictures were taken seconds apart there’s quite a difference between the two. This second one looks almost as if it were taken some time later, when it was lighter. 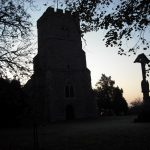 The church again. On the way back at the end of the walk. 06:55. Again, there’s a striking contrast between this picture and the one of the back of the church above. I was ready for a nice hot cup of tea by now.

I’m not what I thought I was either, am I?

I’m not the spontaneous, happy-go-lucky, accommodating, laid back person I thought I’d been. I can be all those things – and more often than not – but it can be selective at times.

If I’ve had a road map of life I haven’t considered it. I think I’ve always had this picture in my head of where I want to be and strive for that. But just up the road and I come across a No Entry sign. The road’s blocked and I haven’t got a clue where to go now. Niadh has his side roads mapped out, but he was always good at reading maps anyway

It was something I didn’t even consider before speaking to Niadh tonight. I hadn’t really thought about the ‘who am I?’ question in depth either. Oh, I have in passing. I’ve felt it at times when I retreat into my home (my shell?) and just be indoors. It’s like I can’t get enough of being here but it gets a bit lonely and claustrophobic at times and I don’t know what to do about it. The solution at the time seems to be to stay here even more because that might make it better. But that doesn’t work either.

Consequently, I become more withdrawn and less adventurous and spontaneous, etc. Deep down somewhere I’d be quite happy at home with me slippers on and me cup of tea and the paper. I’ve turned into an old fogey!!

That’s not to say I haven’t got a sense of adventure. When I’ve done something exciting in life I’ve loved it. Whether it was being fired into the air on an elastic catapult in Bulgaria, camping in the Brecon Beacons or on safari in Africa, I loved it all. Whatever happened to the day out Mick and I and Rick talked about? We need to do something. I need to do something.

Solution?:- Get out and do something then. You’ll appreciate being at home more.

It was only about a week ago I was moaning about none of my friends seeing if I was OK or contacting me. It’s probably a bit narcissistic of me to expect them to. They show their warmth in other ways.

Like Paul asking me if I wanted to stop for something to eat one evening. Then in the middle of dinner announcing that his wife had said I was looking a bit underweight. When I asked if that was why he had asked me to stay, Chris said that she’d merely remarked I looked like I’d lost weight recently.

Then about 10 days ago Siewkeen phoned and asked me over on Sunday for a walk and a roast. It was a lovely day and we walked down to Creeksea and along to Burnham, where we stopped for a pint and a bowl of chips.

Mick’s mentioned coming over to theirs and stopping the night a couple of times and I took him up on it weekend just gone.

They all know I’m going through a difficult patch and offer their help in different ways. I like being with all of them and they give me a warm feeling when I think about the times I’ve spent with them all. In my last post I mentioned being with them and having a laugh. That’s the sort of warmth I appreciate. It makes me feel happy.

And now Mick’s got in touch to say he’s going to pick up the dragon’s tail tomorrow and install it in Mike Springett’s garden. I’m going with him.